Mycorrhizal fungi can help improve soil structure in three interrelated ways. First, biophysically, through the hyphae that penetrate and explore the soil. Second, biologically by promoting beneficial bacteria and microbes in the soil. Then, finally, biochemically through the production of a biological glue called glomalin.

First stop, let’s look at the mycorrhizal hyphae growing into the soil. The hyphae act as a tunnelling machine, applying considerable pressure on soil particles while making their way to get more nutrients and water. The hyphae force organic material and clay particles together leading to micro-aggregate formation.

As the roots of the plant grow, the fungi move down with the root, hyphae higher up stop transporting nutrients and decompose, leaving tunnels behind them. The creation of these tunnels will contribute to enhance air and water penetration and movement. Wet-dry cycles, promoted by mycorrhizae increase the binding of roots, fungal exudates and clay particles.

Biologically, the hyphae (filaments) and their exudates (secretions) serve as food for the growth and increase of the microbial biomass. This biomass secretes compounds that participate in the fixation of soil particles and reduce water tension.

As they grow, mycorrhizal fungi use the plant carbon to secrete a glycoprotein called glomalin. Glomalin seals and solidifies the outside of the hyphae to keep water and nutrients from getting lost on the way to and from the plant.

Following hyphal death, glomalin is deposited in the soil, where it acts as a biological glue and binds soil particles, from the finest to the largest, to form aggregates. It contributes directly to the stable organic matter of a soil and plays a fundamental role in its fertility.

By forming accumulations of soil particles, glomalin allows a better penetration of water and air, reducing the formation of a surface water layer and soil erosion. Glomalin is therefore a major player in the aggregation of soil particles and in their stability.

Indeed, glomalin is difficult to decompose and therefore accumulates. Sarah Wright, the soil scientist who discovered this substance in 1996, considers that glomalin represents an important fraction of the carbon sequestered in the planet's soils. It has been reported to account for 27% of soil carbon and remains in soils for 7-42 years (S. Wright, USDA. 2002).

In conclusion, AGTIV® mycorrhizal inoculants help to obtain better yields and structure the soil by: 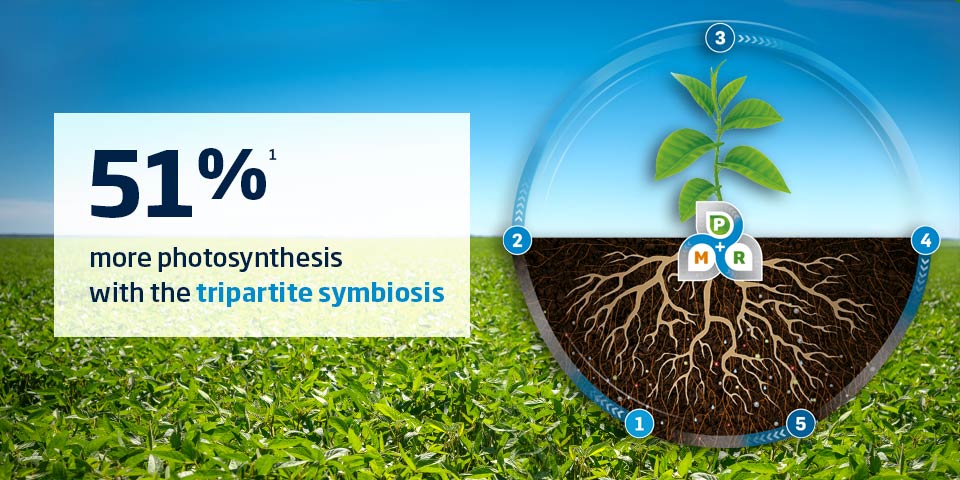 How can the tripartite symbiosis improve crop productivity?

Did you know? AGTIV® inoculants are eligible for organic production

Discover AGTIV® products made with biological ingredients and how our experts help growers use mycorrhizae and rhizobium inoculants in organic production.